Rookies from all walks of life make their debut-2021 Olympia

Swipe down if want to miss this big sale! 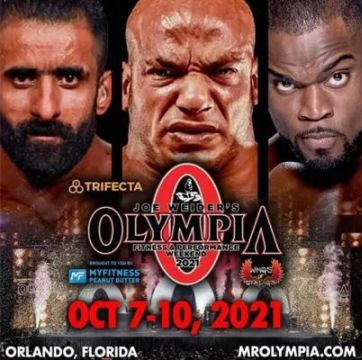 The 2021 Olympia Games ended successfully. Affected by the epidemic, the organizers once again moved the original Las Vegas home stadium to “Orlando.” This year, new faces of various projects have appeared in large numbers, and their strength is strong, and there is a tendency to challenge veterans.

Among the most eye-catching traditional bodybuilding projects, only two of the current four Olympic champions Sith, Remy, Curry, and Leyden came, and these two eventually copied last year’s championship and runner-up rankings.

In this report, we will take stock of various fitness projects:

Last year, Remy was in a dire situation of contracting the new crown, and lack of points in the Olympia, almost missed the Olympia competition. However, shortly before the game, the official Orsay sent a special invitation to Remy on a whim to allow him to go straight to the Olympics. As a result, no one expected that Remy became the first Olympiad champion in Egypt’s history, and he also put an end to the situation that American players have dominated the Olympiad stage for more than 20 years.

If last year it was God who insisted on making Remy a champion, then this year’s defending the champion again is entirely based on strength. Remy has a rare exaggerated outline + overall sense of coordination among the top players in active service, which makes other players look more or less dwarfed once they stand next to him.

If you have to find a shortcoming for Remy, it is that some of the Pose’s waist and abdomen are thick. But as an overweight athlete, it is not easy to maintain such a waist circumference. I hope he will not go back to the old path of Philsis, losing control of his waist and abdomen on the way to getting bigger.

If nothing else, in recent years, there should not be any opponents that have obviously threatened Remy. If you refer to Jackart’s results, it is not difficult for Remy to reach the 4 crown record.

On the first day of the preliminaries, Remy deliberately hid his best state, and the dryness and fullness of multiple angles were not as good as Curry, which also made many people more optimistic about Curry at first.

However, “the preliminaries are general, the finals are bursting” is a good trick that the previous Olympiad champions used to defend their title. As opponents, we must be vigilant!

—Any positive POSE of Curry can be properly tied with Remy, or even slightly better;

—In the side POSE, Curry’s upper body still did not lose, but the side of his legs was exploded by Remy.

—As for the back, Curry’s biggest advantage in the past few years has not been able to show the fullness of the trunk this time, and it appears to have shrunk. In addition, the hips and hamstrings have no advantage, and I am afraid that the most serious points are lost here.

Judging from the current gap, Remy’s chances of winning next year will still exceed Curry.

The Iranian has participated in the finals in the United States for the third time! It may mean that the US government has acquiesced that he is a safe Iranian.

Hardy ranked behind the Sith last year. Without the Sith this year, Hardy once again jumped into the top three and won the elected champion.

I don’t know if it is because of the lighting. Hardy’s circumference/dryness/fullness/coordination this year is much stronger than last year. If Sith still competes this year, he may not be able to beat him.

The biggest obstacle preventing him from competing for the championship is still the problem of innate proportions. In the comparison of the first two undifferentiated kings, Hardy looks more like a 212-pound king. In addition, this is a competition held in the United States. Is it possible to award the championship to the Iranian? These insurmountable factors are placed in front of him, bless him!

Once the son of the Olympiad runner-up, he took fourth place in the finals for the first time, and his results exceeded expectations.

The overall proportions are very comfortable, and the free-form POSE also inherits the “Labrada characteristics” very brilliant. Newcomers can achieve this level, as an outsider should not comment on any shortcomings. All in all, the future is boundless, and we look forward to further changes!

Nick, who threatened to win the Olympiad for the first time before the game, ended up fifth. If it wasn’t so arrogant at first, maybe after the game you will get more praise and affirmation.

Similar to Jackart’s hairstyle, Jackart’s expression, and Jackart’s POSE, if you don’t know him in advance, it is indeed possible to recognize him as Jackart’s younger brother.

His muscle mass and fullness are impeccable, but his congenital long torso and short legs are one of his weaknesses.

In addition, the terrible varicose veins on the calf always make people sweat. At a young age, grades matter, as well as health!

The Orsay runner-up three years ago fell to sixth this time. It seems that there is no progress, but it is not obvious to say that it is regressing.

The Olympiad has always been the world’s most competitive bodybuilding arena. In the eyes of some referees: no progress = regress. After the referees repeatedly looked tired of the same appearance, there was nothing to eat.

In addition, William’s back extension in this competition generally appeared to be too backward, resulting in a dark and small torso back, which magnified the disadvantage of his original narrow skeleton.

Chris has won three consecutive titles! Four weeks before the game, the big boy who cried to his girlfriend and sighed that “the road ahead is too difficult” swept away the haze after winning the championship, and a series of witty words of testimony left the host with no room to speak.

Finally, Chris expressed his gratitude to the other 26 players and a silent tribute to the competitor “George Peterson” who died before the game, demonstrating his champion demeanor.

Chris is undoubtedly a contestant born for the classical bodybuilding project. Innate proportions, partial details, every POSE, every inch of skin reveals a classical atmosphere (every time before the competition, someone always commented that he has no classical characteristics, what mentality?)

Only 27 years old this year, far away from the peak age. There are still countless opportunities to win the championship, as long as he sticks to the classical bodybuilding project, maybe he will surpass the record for the most championships in the history of the Olympiad. (The current record should be the 10 women’s bodybuilding championships created by Iris)

At first glance, he is the smallest player in the audience in a relaxed state, but once he poses, he is against the sky!

As long as he is not standing next to Chris, he can easily become the champion in everyone’s eyes. But it’s not entirely without chance. Once he has more flesh and more details, Chris will be in danger.

Ainsley missed the championship for three consecutive years. If the first loss was due to luck, then the next two should be convinced. The overall proportion and sense of coordination are not as good as Terence, and standing next to Chris appears to be a mini competitor.

Ainsley’s biggest advantage once was that the back thickness and separation did not show up in this year’s game, and the symmetry of the left and right backs seemed to be a problem, and the left side appeared to shrink.

This German bro entered the final for the first time and finished fourth, with a promising future. Although his face is immature, his body shape has revealed the potential of a master, which is reminiscent of the youth of the eight-time champion Li Hani.

The once officially recognized “Lewis successor” finally won the championship! This time, the champion coach “Hani Raymond” who instructed the Sith and Hardy helped prepare for the match, and the winning coach was indispensable.

Compared with the “simply flickering” quality and details of previous years, Derek is fully in place this time! In particular, the front/back extension double biceps POSE perfectly demonstrates the advantage of its extremely wide frame.

But to be honest, there is still a big gap between him and Lewis at his peak, and it is hard to say whether he can defend his title next year.

“Proportion Wizards” Clarida’s failure to defend the title is directly related to Derek’s surprising victory. Looking at Clarida’s body shape alone is still very shocking, but standing next to this year’s Derek seems a little foil.

If it weren’t for Kamal who won the 212 championship two years ago, who knows the country of Libya? A veteran who is about to be over half a hundred years old, he has the courage to stand out from the competitors from all over the world and continue to stand on the highest stage of bodybuilding in the world.

The Spanish bro is fierce and looks a bit like a champion. But from the front, the proportion structure and skin texture are relatively inferior.

The newcomer looks like a “classic player who strayed into 212”. The overall meat volume is not like the traditional bodybuilding level. But having said that, if you go to the classics, you may not have a better ranking. After all, the competition of the classics is also terrifying.

Pearson, who insisted that he was 100% pure and natural, did not seem to be as he wanted after moving from the classical project to 212. The dryness of his muscles is always inferior to his opponents is his old problem.

Who is the strongest newcomer? Welcome everyone to leave comments below and discuss.

What will happen when crazy fans follow Thor’s workout plan