Everyone may exercise chest muscles and abs during exercise.

In fact, the muscles of the lower body are the largest muscles in the whole body. After training, all aspects of the body’s ability will be fully improved.

Having six pack is the dream of every man, so there are too many men struggling to find the most effective way to exercise the abdominal muscles.

Beginners can choose 5-10 pounds, and after some experience can add weight appropriately. Today I share a set of methods for practicing chest with elastic bands, which is very suitable for female friends.

Push-ups can be said to be the most basic form of chest training. Using elastic bands around the shoulder blades and holding the elastic bands with both hands can increase the difficulty.

This action is similar to dumbbell bench presses and can be used to practice pectoralis major.The standing position is used here, the elastic band is wrapped around the scapula, and the two ends of the elastic band are grasped with both hands.

Straighten your arms first, this is the starting position, then bend your elbows so that the elbow joints are 90 °, and then push forward to feel the expansion of your chest.

You can also do a bench press with a stretch band while lying on a fitness bench.

This action is the same as pulling a chest with a tensioner, and you can practice pectoralis major.

The chest is clamped inward at a uniform speed, and the motion trajectory is semi-arc. Hold for two seconds, then slowly open your arms to return to the original position.

The arms are slightly flexed during chest clamping, but not elbow movements.

The movement is the same as that of the chest clip, except that the fixing point of the elastic band is placed at a lower position, and then the arm is pulled up.

The same operation is performed for the lower oblique clamping chest. The fixing point of the elastic band is placed at a lower position, and the arm is pulled down.

The pectoral muscle is a large muscle. The flat, upward, and downward oblique clamping chest can stimulate the chest from three directions. The flat clamping is aimed at the entire chest. The upper oblique clamping is biased toward the upper chest. Prefer training for the lower chest.

Such training can be targeted to strengthen the training of the weak parts, so that the entire chest is fully optimized.

HARISONFITNESS will provide you more training skills, just keep following us. You can  also head to our social media for more products information via the icons below. 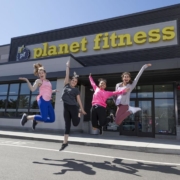 Do you work out regularly? Many people want to stay fit, but they don’t have the time to maintain themselves.

This is where the fitness centers and gyms step in and help you out. You can become a member of these centers and train regularly.